The date, 24th December 1932, is a golden letter day in the history of modern Odisha. As part of the Third Round Table Conference in Britain, as part of the proceedings of a meeting, presided over by Lord Sankey, the Lord High Chancellor of Great Britain (and the person on who later gave his name to the Sankey Declaration of the Rights of Man), the then Secretary of State for India, Sir Samuel Hoare, made the first definite declaration that all Oriya (Odia) speaking people would be brought under a single administration in a new Orissa (Odisha) province, which had remained, at different times, under three to four different provinces. This was the culmination of decades of efforts by many great Odias who worked together to convince the British government for creating this province.

It took more than three years after that for the Orissa state–the first in India to be carved on a linguistic basis–to be actually formed, but the journey had begun. It was now a question of when, no more, if.

This is what Sir Samuel Hoare said in the meeting

Basing our views upon the Reports of those enquiries, basing our views still more on what appear to be a very general agreement, both in India and Great Britain, we have come definitely to the conclusion that Sind and Orissa should both be separate Provinces.

On 1st January 1933, Maharaja Sri Ramachandra Mardaraj, felicitated, Sir Samuel Hoare publicly, where he not just raised the issues that had remained to be resolved (the boundaries had not yet been finalized) but also asserted that Oriyas would be self sufficient soon. He also profusely thanked Sir Samuel Hoare, saying that this decision has satisfied and delighted a million of Oriyas.

Produced here is the speech of Sir Samuel Hoare, that he delivered in reply to the felicitation. 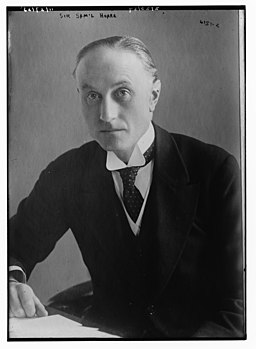 It is a great speech, for not only it acknowledges Orissa’s glorious tradition and talks of it very respectfully and admiringly, but also sensitizes Oriyas about the need for self-sufficiency and protecting its cultural identity even while being part of a greater Indian federation. It also acknowledges the role played by Maharaja Ramachandra Mardaraj, his father Maharaja Harihar Mardaraj of Khallikote and Maharaja Krushna Chandra Gajapati of Paralakhemundi. Finally, he does not hide his joy about being able to satisfy a million Odias, calling it his most successful deliberation one and a half decade.

Here is the speech.

Two years ago, when the Rajah of Paralakemidi put the case of the Oriya to the British Government and the Round Table Conference. very few people realized the importance of the subject. He impressed this importance upon us, and now, in the last few weeks, the Rajah of Khallikote has reinforced the argument that he advanced and convinced us that the time has come to reuite the Oriya population in one administration and to give them once again the chance to develop on the distinct lines they followed as a people till sixteenth century. The Oriyas are under a great obligation to their distinguished representatives who have stated their case to us during the last two years.

The history of Oriyas is a very interesting history, particularly to a conservative like myself. It extends not only over centuries, but over thousands of years, for it began well before the Christian era, and the Oriyas had their own distinctive Government until the sixteenth century, when they were first conquered by the Moghul Empire.

In the long period which has since elapsed, in spite of many difficulties, the Oriyas have maintained their traditions and have kept their place as one of the greatest religious communities of the world. It may not be known to all my fellow countrymen that Puri, in Orissa, with its great Temple of Jaggannath, is one of the great centres of the religious devotion and pilgrimage, to which, generation after generation, and century after century, multitudes of Hindu people have continuously flocked.

To the uninformed Englishman, the name if Jaggannath is associated by tradition with some form of human sacrifice, but I am told by modern historians that that those ideas have no foundation in fact.  On the contrary, Puri has been an example to many other places in the world, for, at the temple of Jaggannath, there are no distinctions between caste and caste, between one Hindu and another. The sanctity of the temple is so great that the high caste Brahmin and the lowest caste sweeper may, without danger to their faith, partake in the most sacred rites.

I can imagine that this religious influence of Puri has been no inconsiderable factor in keeping closely together the administratively divided Oriya population.

Since sixteenth century, these people have been administratively divided between several administrations, and I can imagine that it was this religious tradition which kept them together in a distinct language and civilization. I am glad to know that now, once again they are to have their opportunity to enjoy not only religious but administrative unity.

There will be difficulties to face, and particularly that which confronts all governments at the present time—that of finance. I was glad to note that the Rajah Saheb in his speech said that the Oriyas had no intention of remaining upon a dole from anyone and that they hoped at no distant a date to be self-supporting. I am glad to appreciate that hope, for I feel sure that the sooner the Province can support themselves without help from the centre, the better it will be for the Federal Government of India and for themselves.

I hope, also, that whilst developing to the fullest possible extent their own distinctive cultural life, they will not develop separatist tendencies, but that, on the contrary, they will take a prominent and useful part in the work of the All-India Federation. I think it is very important for the fullest development and progress of the Province that they should do so. I hope that in the future, through the units of the Federation, India will show a greater diversity and less uniformity than in recent years, along with firm unity in the Federation. I believe the Oriyas will approach the problems of Indian Government from this angle—the full development of their own historic features on the basic foundation of an All-India Federation—and will play a very useful part in the scheme of Government for India which we have been developing.

In this connection, I am pleased to recall that our host has an hereditary interest in this question. His late father was one of the most prominent Oriyas in recent times and pressed the scheme for a distinct Orissa administration, being, indeed, one of the first public men to bring it forward. I believe in heredity and I am glad to see the Rajah Saheb carrying on this family tradition. It is always good when the son carries the public work of his father. Our host is one of the most prominent representatives of Indian landowners, and you will agree with me that it is most important that in any scheme for a future of Indian Government the landowners, representatives of the greatest industry in India, should play a prominent part. I would venture to suggest to them to look back on the history of landowning classes in the country in order to note the way in which they can make their influence felt in Indian public life by entering it themselves and taking their share in the day by day affairs of politics. It is a matter of great satisfaction to see that this is just want the Rajah Saheb has done. He is the Chairman of the district board in this part of the country and in many ways has taken part in public affairs.

In this connection, I must note the observation of the Rajah Saheb, that ten million Oriyas are completely satisfied with the results of the Round Table Conference. I my most hopeful moments, I never expected that ten million people would be satisfied with anything that we might do, or might not do, at a conference. We have been having conferences of all kinds, as it seems to me, sometimes at the rate of two or three a week without giving complete satisfaction to anyone. If ten millions of reunited Oriyas are satisfied, this will have been the most successful conference that has taken place, in my experience, in the last fifteen years.

More information on Sir Samuel Hoare can be found here